By Joshua ClaflinJanuary 26, 2016August 7th, 2016Firearms and Hunting
No Comments By now your feet have hopefully gone back to their original shape, and your head has cleared from the craziness of what ended up being an epic SHOT Show 2016.

I logged over 20,000 steps and 11 miles on my Garmin between Thursday and Friday and thought I was able to get into every major exhibit on the main floor. I kept my schedule open on Thursday to catch up with friends, track down Willie, Jase, Goodwin and Martin for an autograph, take in Dana Loesch’s live radio broadcast and as luck would have it, run into Kyle Lamb and Jim Shockey.

Now that the show is over, and you begin to re-group and think about next year’s show (yes, it’s time to start getting ready). I wanted to share a few of my thoughts from a marketing perspective on the event and give you a few takeaways on how you can make next year’s SHOT Show even better.

1. Creative marketing concepts in exhibits
The exhibits I felt that had the most energy and excitement were the booths that incorporated an original concept that brought their brand story to life. They somehow tapped into my craw to create an extremely memorable experience. Not only did these concept exhibits pick up media attention—but they also seemed to be having the most fun. The three most interesting exhibits I experienced were: CAA/Kalashnikov USA, Battle Arms Development, and SilencerCo.

CAA/Kalashnikov’s exhibit was like stepping into an underground Slavic dance club. Hard white floors, high ceilings, AKs on the walls and the contrasting American/Russian imagery and other European-type aesthetics added to the experience. For a brief moment, I felt like I was somewhere else other than Las Vegas.

SilencerCo’s booth had a covered walk-in that integrated seamlessly with their ‘Fight the Noise’ campaign along with their catalog, booth staff, past year’s advertising campaign and website. With a gray spray-painted outdoor scene and impressive imagery, the booth was also very experiential that brought the brand to life. Darren Jones, Media Relations and Sales with SilencerCo, said, “This show has been completely overwhelming—in a good way. We’ve had tremendous response to our newly launched products, and it will probably be one of our best years ever. We fully expect the ball to keep rolling.” (Source: NSSF) Takeaway: The highly saturated MSR segment and burgeoning suppressor segment will become increasingly harder for brands to stand out. Consider integrating a theme into next year’s booth that incorporates and aligns with your brand’s story to make it more attractive. Introduce your theme in your advertising and digital marketing over the next 11 months. Take your booth visitors out of SHOT Show and into your brand’s world. This would play exceptionally well down on the first level where the exhibits aren’t as exciting. This second point also ties into #1. The exhibit that stood out head and shoulders above all others on the main floor was Sig Sauer. If you saw it, you know what I’m talking about. It was unbelievable. Sig looks to be doubling down on their repositioning effort as a “total system provider.”

“Obviously, SHOT Show is important to us,” said Tom Taylor, Vice President of Sales and Marketing for Sig Sauer. “We made a huge investment in the booth because we want our customers to know that we are a total system provider. And it was evident from the crowd in the booth that the effort wasn’t lost on anyone.” (Source: NSSF)

Takeaway: To make a lasting statement—go big! (if you got an extra few million dollars in your budget).

3. Busyness hindered social media
I frequently posted on Twitter and couldn’t help but notice that a lot of brands were not engaging with the network as much as I expected. There were two hashtags being used: #shotshow (23,699 tweets) and #shotshow2016 (14,345 tweets)—which fragmented the feed and caused some confusion on which one to follow. Some brands I noticed didn’t use the show’s hashtag at all. Instagram got 55,555 posts.—and noticed that #shotshow wasn’t even trending on Facebook. In comparison, events become trending topics on Twitter when they have over 50K followers. So the question I ask is ‘why wasn’t there more tweets/posts!?’

Takeaway: Using conference hashtags are important because it allows you to reach a larger audience. Even though the show was busy, there exists an opportunity to stand out by posting to social media more regularly throughout the week to drive traffic to your website and booth. Other exhibitors don’t seem to be taking advantage of this opportunity. Maybe you can?

4. Trending: lightweight and quiet
I noticed a lot of companies incorporating carbon fiber into their platforms like Christensen Arms’ CA-15 VTAC as well as suppression like the new Maxim 9 by SilcencerCo., and Daniel Defense’ 300 BLK integrally suppressed rifle—the DDM4 ISR300. Patrick Woods from Spring Guns & Ammo said, “One of the biggest innovations he saw was lighter-weight long guns. “There’s a lot of new rails out that are much, much lighter, that still provide the modularity that people are looking for in an AR-15, and are still incredibly durable and rigid.”

Takeaway: How can you begin to integrate lightweight materials into your product offerings? Knife handles, tactical gear, holsters, cans, hand guards, stocks, barrels, mags, etc.? This may be worth taking a look at.

5. The industry is strong and “on alert.”
Paul Pluff, Director, Marketing Communications with Smith & Wesson, said, “This is the premier show for us, and once again this has been a very busy time. The response to our new products has been fantastic, and based on what we’re seeing; we’re very much looking forward to the year ahead.” (Source: NSSF)

With the ever-increasing attacks on our industry from the administration and the anti-gun/hunting groups—the industry remains extremely strong. I was surprised by some who suggested to “hold back” on spending for development and hiring until things pan out in Washington. I can see their point, and most likely many will heed the advice. However, rewards always favor the risk takers. We have to be “on alert” as NSSF President Sanetti suggests, but we must also continue to push and grow our businesses regardless of the political climate. I expect many forward-thinking manufacturers to continue with their plans irrespective of the industry warnings and threats we face this year.

Takeaway: We are always going to have opposition to our industry, lifestyle and heritage. But it shouldn’t stymie innovation and manufacturers’ plans to continue with their development plans. To do so would mean to admit defeat.

To wrap up, exhibits who integrated creative concepts had greater interest, use social media in future shows to help your brand gain greater awareness, lightweight, and quieter products are on the rise, and with a strong industry powered by some of the smartest and bravest people in the world who keep this country safe (collectively and individually) 2016 looks to be a great year.

What were some of your takeaways? Please comment below. In this planning guide, you will learn how to use inbound marketing to make your trade show more successful and profitable.

By Josh Claflin, Brand Development, Inbound Marketing & Creative Strategy
Josh helps brands in the hunting, outdoor and firearms industry who are struggling to develop their brand; grow, stabilize or increase profits through their websites; increase revenue through online channels and enter the digital era of marketing. Do You Really Know Who Your Customers Are? 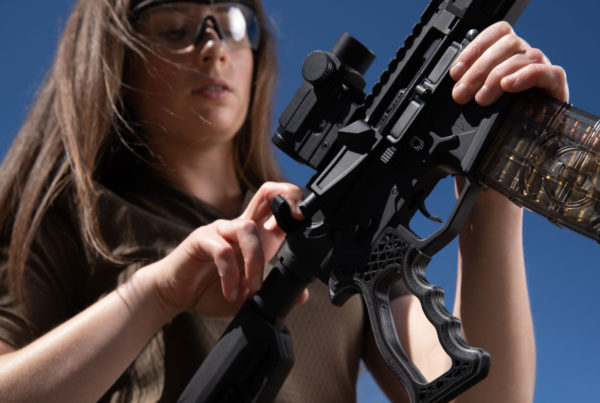 7 Trends That Will Affect Outdoor, Hunting and Shooting Sports Marketing in 2020

Most companies in the outdoor, hunting, shooting sports, and defense industries struggle to clearly communicate their brand and products. At Garrison Everest—Outdoor Industry Marketing Agency, we create proven messaging and marketing programs that help you get the growth result you’ve been working toward.